The Justice Department’s antitrust division is ramping up hiring of trial attorneys from Big Law firms as the Biden administration heightens its focus on competition amid a surge in mergers.

The division, led by Assistant Attorney General Jonathan Kanter, has brought on at least five partners from large firms—including Andrew Forman, now deputy assistant attorney general—since Kanter was nominated in July 2021, according to a Bloomberg Law analysis and data provided by the law firm and attorney analytics company Firm Prospects. At least a dozen lower-ranking attorneys from such firms were also hired during the period.

The hiring push reflects Kanter’s focus on going to trial on tough cases rather than settling or accepting plea deals. The approach aligns with the department’s ongoing lawsuits against Big Tech companies, such as Alphabet Inc.’s Google, and Biden’s order to federal agencies to redouble enforcement of competition law.

“It’s unprecedented for the division to hire so many senior-level litigators from outside, and the hiring surge may corroborate the rumors that DOJ is ramping up to file major new cases,” said Andre Geverola, a partner at Arnold & Porter Kaye Scholer and a former director of criminal litigation for the division, in an email.

Heightened market activities are also spurring a hiring boom. In fiscal year 2021, the department received over 3,500 merger notifications that would need its review, the most since its filing requirements went into effect in 2001, Kanter said in a January 24 speech.

“The surge is also occurring as the division is experiencing a historic resource shortage,” he said, adding the division has 350 fewer employees than it had in 1979.

Some of the high-profile hires were slotted in the division’s new litigation unit—a team meant in part to provide specialized trial experience for higher-stakes cases undertaken by more junior staff.

The DOJ’s current antitrust lawsuits against some of the largest companies, including Google and American Airlines, also may be driving the hiring surge.

“Now that Kanter is there and they have major cases happening, including Google, it takes a lot of work and a lot of bodies,” said Phil Korologos, co-leader of Boies Schiller Flexner’s antitrust and competition practice. “Antitrust bodies, specifically.”

Kanter’s four-year stint at Paul Weiss likely affected the department’s recruiting strategy, given that at least four lawyers from the firm followed him to his new employer.

Kanter worked at Paul Weiss from 2016 to 2020, rising to become co-chair of the firm’s antitrust group before leaving to found his own firm. He ran his firm for about a year before being confirmed last November at DOJ.

The most senior of the four Paul Weiss lawyers joining Kanter at DOJ is Forman.

The pair overlapped at Cadwalader, Wickersham & Taft before reuniting as partners at Paul Weiss. They also started their careers as associates with Fried, Frank, Harris, Shriver & Jacobson, according to their LinkedIn profiles.

Other former Paul Weiss associates—Marissa Doran, Victor Liu, and Arianna Markel—also made the trek from the firm to the Justice Department. 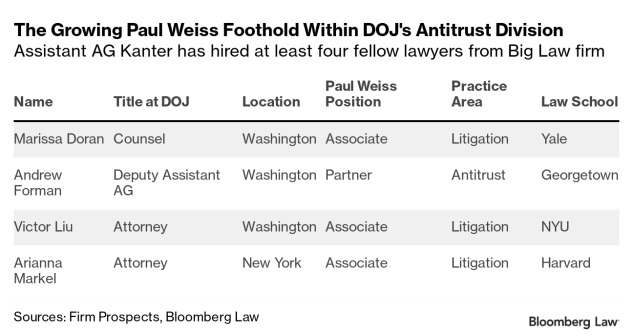 Kanter has a reputation as a “collegial” practitioner with leadership skills, Dan Binstock, a Washington-based legal recruiter, wrote in an email. “It’s not surprising that former colleagues would want to join him again at a particularly meaningful time in the Antitrust Division,” he wrote.

The division recently nabbed a pair of experienced partners from other firms.

Michael DeRita, who joined DOJ as trial attorney from Kirkland & Ellis, helped defend Nexstar Broadcasting Group in an antitrust lawsuit brought by the division in 2016.

Some partner-level attorneys, often successful in their own right, have varying reasons for joining the government, perhaps at lesser pay. They may want to go into public service or upgrade their position back at their firms with additional trial experience, said Jeffrey Lowe, a managing partner and recruiter at the legal executive search firm Major, Lindsey & Africa.

More junior lawyers and associates joining the DOJ may be looking for practical courtroom involvement and valuable years of government experience before seeking to return to Big Law as a partner, Lowe said.

Attorneys who are drawn to opportunities at the antitrust division may be finding its newfound vigor—brought on by the Biden administration’s plan to reign in monopolistic corporate behaviors—too good to pass up, said Justine Donahue, managing director for legal recruiter Macrae.

“It’s an opportunity to get involved with some really high-profile matters,” Donahue said. And for some partner-level lawyers, “you have the chance to come in at a really high level.”

The newly arriving attorneys join the division following some recent defeats. The DOJ has twice failed at trial to convict anyone under its new guidance that employers’ no-poach agreements are criminally liable.

It also failed three times to convict a series of current and former executives from companies such as Pilgrim’s Pride Corp. and Tyson Foods Inc. for alleged price-fixing of broiler chicken products.

Still, the DOJ’s current portfolio of active litigation is the largest it has ever had at one time, said Mark Hamer, chair of Baker McKenzie’s antitrust and competition practice group and a former division trial attorney. “The division will always be an attractive place to go for antitrust lawyers because, by definition, every matter they’re litigating is significant,” he said.

The division engaged in two simultaneous August trials in DC federal court to prevent mergers in the book publishing and health care industries. Rulings in both trials are expected this fall.

The department is also currently weighing whether to file another suit against Google over online advertising market dominance, Bloomberg News has reported.